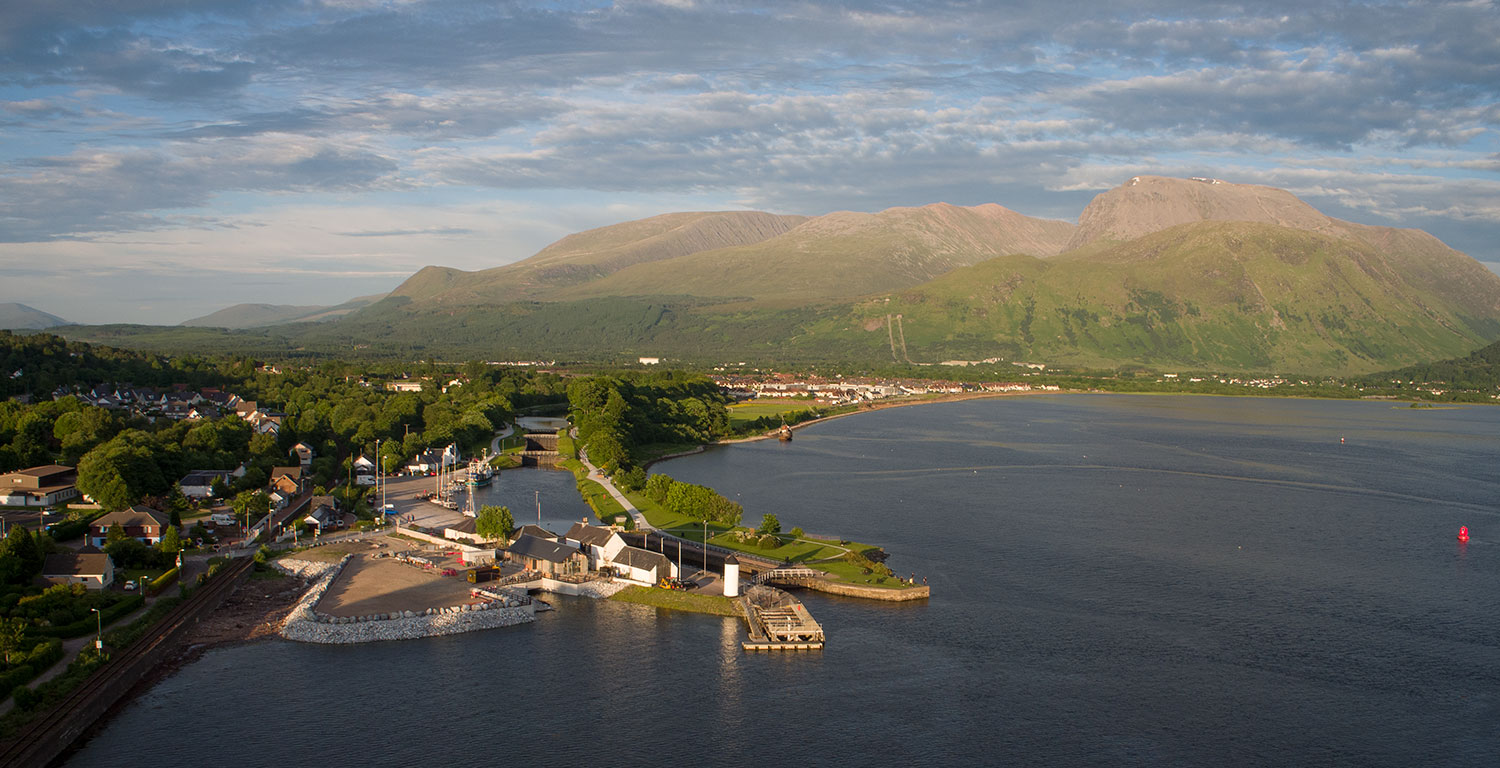 Information about booking berths, launching boats from the slipway and an overview of these new marine facilities – including a coffee shop which may be available in August 2022

The Caol Regeneration Company (CRC) was formed in 2005 as a charitable company limited by guarantee, with the object of contributing to the social and economic regeneration of Caol. As part of its remit, CRC proposes to establish a community-owned marina adjacent to the Southern outlet of the Caledonian Canal. This will offer much-needed marine services such as slipway, moorings and related services to visiting yachts and boats as well as local boat owners. There is potential for berthing cruise liner tenders as a back-up or alternative to the recently developed Fort William pontoons, as well as collaboration with the School of Adventure Management at West Highland College UHI. Local schools have expressed an interest in linking maritime activities for pupils to their curricula. The marina will contribute to the tourism infrastructure required by the Outdoor Capital of the UK, resulting in increased marine visitors. The Centre will operate as a social enterprise, offering healthy lifestyle choices in outdoor marine activities.

CRC works in partnership with a number of agencies such as Highland Council and Highland and Islands Enterprise, contributing to community planning and other areas of community development. Its directors come from all areas of local life – business, Highland Council, private individuals, agency advisers and local charities. CRC has consulted widely on its proposals for a marine centre, including well-attended public meetings when professionally developed plans were presented for scrutiny. The project enjoys wide support and, after a rigorous application and review process, CRC was awarded planning permission as of 17th May 2017.

Agencies including Highlands and Islands Enterprise and Highland Council have provided consistent financial support to pre-construction effort including the appointment, via EU LEADER funding, of project managers. Northern Light Consulting, a local firm, were retained in February 2017 (after a public tender) to raise the capital funding needed to build the marina and subsequently to manage procurement and supervision of contractors.

A 2011 report developed the initial concept of a marina of just over 80 berths, capable of hosting a range of boat and yacht sizes on pontoons arranged in the shelter of floating breakwaters. Shore facilities normally associated with a marina were also envisaged, including a service building to house reception, toilets and showers, as well as a fuelling point and effluent management. A car and boat park was incorporated in the plan, and a slipway for the launching and recovery of day boats, trailer sailers and the like. A preliminary estimate put the cost of the development at around £3 million.

The report however made it very clear that further detailed engineering studies were required to determine issues such as hydrographic and geological conditions. These studies threw up the need to relocate the floating infrastructure in deeper water so as to minimise disruptive and costly dredging. This in turn generated further redesign work and a new marine layout, as shown on the drawings to be found elsewhere in this website. Also reflecting local consultations, the scale of the marina has been reduced to approximately half of the number of berths originally envisaged.

Scottish Canals initially offered the use of their existing sea lock buildings for reception and facilities. These buildings would have been restored to better than existing condition, and many years of detailed joint planning had scoped a partnership arrangement and developed a suitable layout. A major setback occurred in March 2019 when the Chair of Scottish Canals intervened personally to express his concern about partnering with CRC; and on 3rd April his Chief Executive announced her decision not to permit our access to the canal buildings. This has cost the project almost a year’s delay and many thousands of £s, and was a complete surprise and shock to CRC and our project managers. However an attractive new building to house marina services and a community cafe has now been designed and consented adjacent to the canal lock buildings.

A company limited by shares has been formed, known as Thomas Telford Corpach Marina Ltd. However, until ready to start trading, a small working group was formed under the aegis of CRC to drive forward the project. Initially chaired by the late and much respected Dr Su Sen, his contribution and inspiration to the project are recognised by all.

The steering group meets monthly to maintain momentum on the project.

Effective partnership is seen as key to a successful outcome. As well as the wider community, and in particular as represented by Kilmallie and Caol Community Councils and the local members of the Highland Council, Highlands and Islands Enterprise and Crown Estate Scotland are critical partners. We have entered into a five year Local Management Agreement (LMA) with Crown Estate Scotland securing our rights to the seabed subject to certain conditions, and they have been highly supportive in other ways. Together with Scottish Canals, both organisations are also landowners within the site required, as are Lochiel Estates who have similarly expressed support for our aims.

To be successful, the project is dependent on the support and cooperation of all these partners, and especially that of the local communities.

We are mindful of the setting of the marina, iconic both in terms of landscape and heritage, and it is our objective to deliver a project which will be fit for that setting and wherever possible enhance it. This will be complemented by our vision of how the marina should operate in practice – as a centre for the enjoyment of the water, with workshop activities in the main being conducted elsewhere.

As regards the wildlife in the environs of the bay, we are guided by the formal views of Scottish Natural Heritage. It is our intention to set the highest environmental standards in the development and operation of the marina, to that end we have joined British Marine Scotland and will be pursuing their structured approval via “The Green Blue”initiative.

As a future player in the Outdoor Capital of the UK (OCUK), we intend to develop access to the local lochs, rivers and canals. For visitors these offer recreation, relaxation, challenge and environmental education and, in doing so, provide an attraction to visitors to spend more time in the area. For locals, the water offers the same appeal and can form an important part of an active and healthy lifestyle.

In addition, we would expect this project to offer opportunities for employment, training and volunteering as it moves towards completion. Until recently, Caol was within the 15% most deprived areas in Scotland (per the Scottish Index of Multiple deprivation) and still suffers from relatively high unemployment and limited opportunities for job creation. The experience already discovered by both Mallaig and Lochaline marinas was that the direct spend from visiting yachts was making a material positive impact on local businesses and we would hope to be able to replicate this in the Caol and Corpach areas. Provision of marina facilities is also highlighted as a priority in the Lochaber Community Development Plan, particularly recognising the significant impact they have on small, fragile communities.

During 2009 and early 2010, Scottish Enterprise commissioned a report by the Tourism Resources Company entitled “Sailing Tourism in Scotland”. The report concluded there is a short fall in berth facilities going forward over the next 10 years. For the West coast in particular that short fall equates to 617 Annual berths and 343 Visitor berths. Another report ‘Overview of Marine Leisure Tourism Sector in Lochaber’ (Sept. 2006) by Stewart Millar Associates, has clearly established the local need. The Marine Tourism Strategy for Scotland, “Awakening the Giant“, is an excellent fit with the aims of Corpach Marina; this strategy is currently being updated under the title “Giant Strides”. A link to this important new strategy document can be found here.

The proposed facility will meet the needs of the marine leisure sector which are inadequately catered for at present in upper Loch Linnhe. There are limited places to land or launch small craft which is a major constraint on the development of marine tourism in Loch Linnhe, and none of the ‘walk ashore’ convenience within the safe haven offered by a marina. Finally, the centre will involve collaborative working between the communities of Caol and Corpach as the best location is on the border between the two.

There is an opportunity to add to the marine infrastructure of Lochaber, offering valuable new facilities for locals and visitors alike, and complementing existing businesses. This has the potential to create employment, and to link with Scottish Canals and other marinas down the West Coast in meeting the exciting challenge of Scotland’s Marine Tourism Strategy.

As we stand at the beginning of 2020, the project has secured all necessary statutory consents, including a Marine Scotland licence. Significant funding approvals have come from the Scottish Government (RCGF £1.465m), EU LEADER (£171,000), SSE Sustainable Communities (£100,000) and several “aggregate/landfill” funds. Additionally, Highland Council has recently approved £77,000 from their Town Centre Fund. These are sufficient to pay for Phase 1 (all civil engineering, including the public slipway, car park, revetment, and dredging) and Phase 2 (our new community cafe and marina facilities building). Public procurement was completed in 2018 and we have preferred contractors in place. Contract award for these phases is imminent. We continue to focus on securing construction funds for Phase 3, the floating infrastructure (just over £1m) with a view to commissioning the marina during 2021. There remain significant hurdles to overcome but the group is committed to delivering this exciting project with the wide support of local communities. 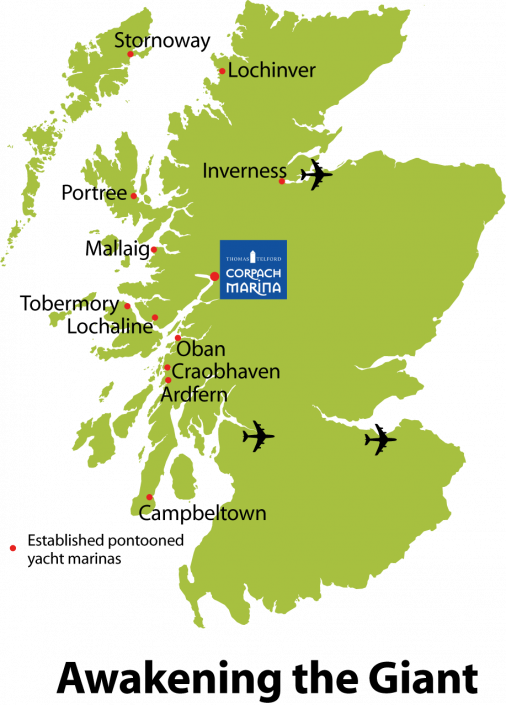